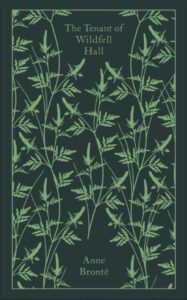 This month at the Donostia Book Club meeting we followed the recommendation of the translator, Miguel Ángel Pérez Pérez, and talked about Anne Brönte’s “The Tenant of Wildfell Hall”. This second and at the same time last novel by the youngest of the Brönte sisters was published in 1848, a year before her premature death at the age of 29 caused by tuberculosis.

Reading it today, it’s hard to believe that after Anne’s death, Charlotte tried to stop “The Tenant of Wildfell Hall” from being reedited. All this was due to the crude descriptions of drunkenness and debauchery of one of the characters in the novel. However, reading it today, we cannot have the slightest doubt that Anne, in a very direct way, without embellishing the situation, criticized the dangers of these vices and showed how the husbands who had them put their wives in a precarious situation, denouncing the mistreatment and abuse of which their wives were victims. It was definitely not a subject that was openly discussed at the time the novel was published. Surely readers can realize all that just thinking that in the sisters’ lives, none of the three could sign their books with their own name. All three hid behind male pseudonyms: Acton (Anne), Ellis (Emily) and Currer (Charlotte) Bell.

The novel, despite, or thanks to, the general disapproval because of going against Victorian morals and being considered obscene (yes, yes, I mean describing violence within marriage) was very popular. Considered unsuitable, especially for female readers, it aroused curiosity like a forbidden fruit. It also has all the elements to attract readers: an idyllic English town, an old house, a mysterious woman, a romantic interest, drama…

To those of you who have not yet been encouraged to read this classic, I want to say that not only the story of the mysterious Wildfell Hall tenant, Helen Graham, is intriguing. Also the way of narrating it is quite original: Anne decided to show us two points of view. The first, that of Gilbert Markham, we see through letters that he sends to his brother-in-law. The second, Helen’s, is taught through her diaries. I don’t want to reveal too much of the novel since I really think it deserves to be read, I will only add that the author didn’t follow the typical for her sisters’ style of romanticism, but she opted for realism and that, in such a hard story, was a really good decision. Getting to know the character such as Helen is impressive. From the perspective of time, “The Tenant of Wildfell Hall” is considered the first feminist novel not only thanks to the integrity of Helen, her courage to go against social conventions, but especially because of going against the law of the England in the 19th century by fleeing from an abusive husband and taking their child with her.

For those of you who have decided to read it or have already read it, I propose these topics to analyze the novel in more depth: