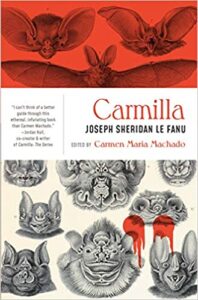 November, right after Halloween, it’s a great time to read horror books. That is why this month at the Donostia Book Club we are talking about Carmilla by Sheridan Le Fanu, a Gothic novel from 1872. The Irish author, Joseph Sheridan Le Fanu created one of the first works of vampire fiction, prior to Bram Stoker’s Dracula (1897) for 26 years. First published as a series in the magazine “The Dark Blue” (1871-1872), it was reprinted in Le Fanu’s collection of short stories “In a Glass Darkly” (1872). The story is often anthologized, for example, in the beautiful edition published by Alianza Editorial “Vampiros” with 4 stories: Carmilla, Alekséi Tolstoi’s La familia del Vurdalak and Polidori’s El Vampiro. Carmilla has also been adapted many times in movies and other media and continues to attract a lot of interest today. It also set an example for many years of how to represent ghosts in scary stories.

The story is told by a young prey to a vampire named Carmilla, who is later revealed to be Mircalla, Countess Karnstein (Carmilla is an anagram of Mircalla). The character is a prototypical example of the lesbian vampire, who expresses romantic wishes, or rather sexual ones, towards the protagonist. It must be said that reading it today, it has nothing explicit or vulgar, it is very subtle. But, considering the year when it was written, when any orientation other than heterosexual was a taboo, it could cause a lot of emotions. The novel never recognizes homosexuality as an antagonistic trait, allowing it to be intuited and not mentioned, but at the same time it leaves no room for doubt.

Although Le Fanu portrays his vampire’s sexuality with the caution one would expect for his time, it’s clear that lesbian attraction is the main dynamic between Carmilla and Laura, the narrator of the story:

“Sometimes after an hour of apathy, my strange and beautiful companion would take my hand and hold it with a fond pressure, renewed again and again; blushing softly, gazing in my face with languid and burning eyes, and breathing so fast that her dress rose and fell with the tumultuous respiration. It was like the ardor of a lover; it embarrassed me; it was hateful and yet over-powering; and with gloating eyes she drew me to her, and her hot lips traveled along my cheek in kisses; and she would whisper, almost in sobs, “You are mine, you shall be mine, you and I are one for ever.” Then she had thrown herself back in her chair, with her small hands over her eyes, leaving me trembling.”

Comparing Carmilla to other literary vampires of the 19th century, she is certainly a similar product of a culture with strict sexual mores and tangible religious fear. We find some of the vampire clichés that survived to this day:
– Carmilla has nocturnal habits, but is not limited to darkness
– she has an unearthly beauty
– she can change shape and pass through solid walls
– her alter ego is a black cat (in Dracula’s case it is a dog)
– she sleeps in a coffin.

Carmilla works like a gothic horror story because we see how its victims, little by little, are succumbing to its temptation, how they are attracted to what was socially considered perverse, the physical attraction that will have serious consequences. Some critics, including William Veeder, suggest that Carmilla, especially in her extravagant use of narrative frames, was a major influence on Henry James’s The Turn of the Screw (1898).

It’s undoubtedly an interesting text and also, apart from all these references, really entertaining, perfect for an autumn night, like any good scary story.

For those of you who dare to read it and analyse it in depth, I leave you some questions to keep in mind:

What is the perception of her victims by Carmilla?
What is the importance of dreams in the story?
How important is isolation in Carmilla?
What resources does the author use to provoke fear?
How important is religion in the story?
Who is Bertha and how can we compare her experience and personality with Laura’s?
How is motherhood portrayed in Carmilla? Compare it to the way parenting is described.
What similarities do you see between Carmilla and Dracula?