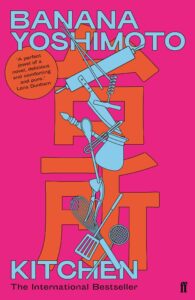 Banana Yoshimoto is one of Japan’s most famous contemporary novelists, second only to Haruki Murakami. She chose “Banana” as a pseudonym because, as she explained in one of the interviews, she loved banana flowers and thought the name was “cute” and “intentionally androgynous”. Her real name is Mahkoko Yoshimoto. Yoshimoto mainly writes fiction and this month at Donostia Book Club we decided to talk about her novel “Kitchen”, published in 1987 and brought to Spain in 1991 by Tusquets Editores.

The story has only 206 pages but it completely immerses us in the world of Mikage, a young woman who faces the death of her grandmother, her only relative. In the least expected moment Yuichi and his transsexual mother, Eriko invite her to live with them. At their home, she finds the support she needs to enter adult life all alone.

The plot revolves around the feeling of loss, grief and loneliness. Items such as cooking, food, or plants take on a deeper meaning than might be expected at first glance. Mikago grows as a character, she realizes that she will be fine, that love may appear along the way but it’s not essential to get ahead. A story is told in a direct, almost ascetic way so that its meaning fills us almost inadvertently. A very Japanese aesthetic, but with Western elements, such as reflections on romantic love so rare in Japanese culture.

Apart from all these elements, the book has wonderful descriptions of the food. The way of talking about some typical Japanese dishes makes us almost savor them together with the characters in the book. A real pleasure. I hope you´ll feel like reading it!

For those of you who want to analyze the novel in detail, I have some questions to consider: