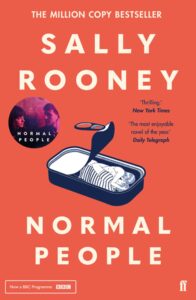 In January, Donostia Book Club talks about Normal People (2018) by Sally Rooney. It’s the second novel by the Irish author considered by many to be the literary phenomenon of the decade. The book follows Marianne and Connell’s relationship from high school onto adulthood, once they both study at Trinity. Connell, who comes from the working class, is popular at school and Marianne, who comes from the upper class, has trouble connecting well with her peers. Once in college the situation changes and it’s Connell who has a hard time fitting in while Marienne shines in social life. The popularity of the novel, both among critics and the public, led to the adaptation into a series, the script of which was co-written by Rooney herself and this is largely due to the universality of the central theme: the nature of human relationships and of friendship.

The book is not just a simple love or friendship story. Rooney talks about many dilemmas young people face today. Gender roles, sex, drugs, abuse, communication problems and insecurity. And all of this is seen through the lens of social class differences, economic status and popularity. All in all, the story of Marianne and Connell sends a clear message of the importance of being oneself, of having a clear self-image.

Another great theme in the novel is the importance of communication, the weight of misunderstandings, of unspoken words. It is especially Connell who faces this problem and in one scene he dreams of a perfect phrase to send by email to Marianne only to realise that it would be useless having her by his side.

As is often the case with novels that confront us with universal themes, apparently simple but actually more complex, the book gives us the opportunity to have a great debate about its content. For those of you who want to analyze this story in depth, here are some issues to reflect on:

I hope you are encouraged to read it and comment on it with Donostia Book Club!