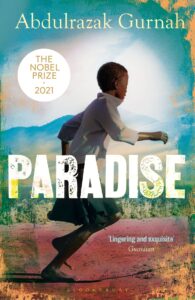 The latest Nobel Prize in Literature, Abdulrazak Gurnah, is quite unknown in Spain. Novelist and academic born in 1948 in Tanzania who lives in the UK has so far published 10 novels and received this award for his “uncompromising and compassionate penetration of the effects of colonialism and the fate of the refugee in the gulf between cultures and continents”.

On February 14th, At the Donostia Book Club, in the Central Library (San Jeronimo street) we get aquainted with the work that changed the course of his career: his fourth novel, Paradise, published in 1994. It was nominated for the Booker Prize and Whitebread. In the interview for Babelia, the cultural supplement of El País, Gurnah said about this book: “It was the novel that allowed me to reach many new readers. The Booker nomination process at the time wasn’t as long as it is now, it was fresher and more exciting, or at least it was for me.”

Thanks to the same interview we know that the first thing Gurnah wrote about Paradise was its final scene and six or seven years later he returned to that text and ended up becoming interested in colonialism, a central theme for all his works. A well-known African academic, J.U. Jacobs, believes that this book, like Chinua Achebe’s Everything Falls Apart (1958), is Gurnah’s response to Joseph Conrad’s Heart of Darkness (1902), which challenges the dominant Western discourse about Africa at the beginning of the 20th century.

Taking all this into account, reading this novel we must ask ourselves about the following questions:

I think that just with these brushstrokes it’s clear that it’s an exceptional book and that it’s really worth reading. Are you encouraged to read it?