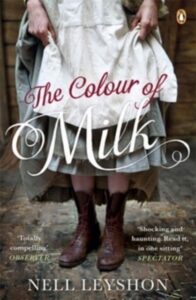 The colour of milk, Nell Leyshon

On March 14th, at the Donostia Book Club, in the Central Library (San Jeronimo street) decided to analyze The Colour of Milk by Nell Leyshon, a short novel published originally by Penguin Books in 2012 and chosen as the best novel of 2014 by the Madrid booksellers’ guild. “this is my book and I am writing it with my own hand” begins the novel. At first it may surprise you that the book ignores capital letters, but that is for a reason: the narrator is an illiterate girl who learns to read and write from the Bible. Mary tells us what her life in rural England in the 1830s is like and how little a woman can decide about herself in that environment.

In this novel, we find simple sentences and almost spoken language and yet it isn’t a simple writing. The complexity of the plot is something impressive to achieve in a novel that doesn’t even reach 180 pages. It’s a story full of images that are both disturbing and traumatic. Playwright and novelist ,Leyshon says that one of her goals in writing novels is “so that the reader can add something to the story. Like when we are in the theater and watch the drama unfold, the actions of the characters give us the chance to interpret their deep intentions” (Cuesta I. 12.29.2014. ‘Del color de leche‘, mejor Novela según los libreros de Madrid. El País).

It’s a dark book, often compared to Alice Walker‘s The Color Purple and Margaret Atwood‘s Alias Grace. The rural setting has a lot of prominence and this is reflected in the parts that the novel is divided into as they change with the seasons. It’s also worth mentioning that this setting has nothing to do with the idyllic Regency novels, we won’t find anything comforting here as for example in Jane Austen‘s books.

In case you decide to read it, I leave you some questions to ponder while reading The Colour of Milk:

I hope you’re tempted to read it and comment on it with us!