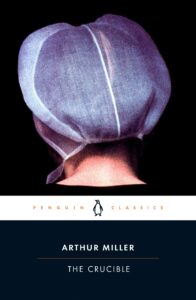 On April 4th, at Donostia Book Club we are going to venture to talk about something a little different and we are going to analyze the famous play by Arthur Miller, The Crucible, premiered in 1953. At first sight it’s a fictionalized account of the famous witch trials in Salem, Massachusetts in 1692. But in reality the work is an allegory of some events much closer to the author: the McCarthyism of the 1950s, the accusations, mostly false and fabricated, that led to the persecution and repercussions of anyone suspected of disloyalty, communism, subversion, or treason.

Between 200 and 300 people were accused of witchcraft in Salem. 19 of them were sentenced to death: 14 women and 5 men. In The Crucible Arthur Miller presents the mechanisms that unleashed this collective fever of accusations, fear and religious fanaticism. Mechanisms that today we know to be very similar to those caused by Senator Joseph McCarthy.

In 1996, Arthur Miller wrote an article for The New Yorker, “Why I Wrote The Crucible” where he regretted that few remembered the events that inspired his work. He said: “What terrifies one generation is likely to bring only a puzzled smile to the next .” And that is why during our meeting we will try to look in detail at the historical context of both the plot of this story, and the one that was present in the life of its author.

The play is divided into four acts and the events depicted somewhat differ from the historical events. Miller warns in the prologue that he took various poetic licenses to limit the number of characters. It is a text of only 126 pages and was a Tony Award winner. I hope you are encouraged to read it and comment on it with us during the meeting. I leave you some questions for a bit more in depth reading: