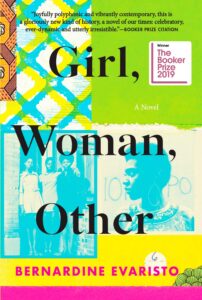 On May, 9th at Donostia Book Club we are going to talk about a book recommended by the Official School of Languages in Donostia for level C1 of English: Girl, Woman, Other by Bernardine Evaristo published in Spain by Alianza and in the United Kingdom by Penguin UK. In 2019, the novel won the Booker Prize (shared with The Testaments written by Margaret Atwood).

Evaristo began writing the book in 2013. It is an ambitious story of 12 mostly black women in the UK from the early 20th century to the present day. The youngest protagonist is 19 years old, the oldest 93 (and another who would be older than her is already dead). Their lives intertwine in parts, and they have a common event at the end.

The novel tells stories that we are not used to hearing (“the hidden stories of the United Kingdom” as Evaristo says) in a fluid, fun and pleasant way. We have characters born in the 19th century, lesbians, transgender people, business women who made their way in a chauvinist world…

In the book the comedy and drama are enhanced by the narrative style. It is written mostly with no punctuation, in lines that float across the page, ending and beginning in the natural way of thinking. Evaristo calls it “fusion fiction”, while critics have compared it to free verse or prose poetry. Described this way it might sound weird or unnatural, but it’s actually really instinctive once you get used to it. This fluidity of Evaristo’s voice seems to have its origins in her theater experience.

In short, Girl, Woman, Other tells the stories of a group of loosely connected people, mostly black women in complex mother-daughter relationships, across 120 years of British history, from the early 20th century to the present day. At the same time, it highlights the problem of racism and chauvinism (double discrimination) that most of the characters have to face in their lives. They are stories of love, of perseverance, of getting ahead. None of the characters is seen as a victim, they all fight for their future and their dreams.

If I had to single out one story, the one I liked best would be that of Grace (a bi-racial woman who lived between the 19th and 20th centuries), but what blew me away the most was an event in Shirley’s and her husband’s life. I highly recommend it. Although it deals with serious topics, it is very easy to read, the pages turn by themselves.

If you dare to analyze the book with Donostia Book Club, you can use the following questions as a reading guide: