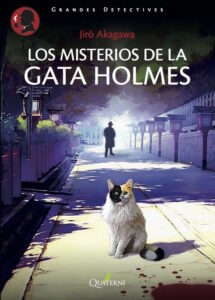 For all the fans of detective novels who want to read something cozy: this is your book, Los misterios de la gata Holmes by Jiro Akagawa. With this novel the author began in 1978 a well-known series of books that made the number of readers of mystery novels skyrocket in Japan. A mix of comedy and mystery that has become an emblematic work for readers and that has led its character, the calico cat Holmes, to be one of the most beloved and popular characters in Japanese fiction. A detective cat.

“Officially” the detective is Yoshitaro Katayama, a 29-year-old policeman who gets dizzy or faints at the sight of blood, because of his shyness has problems only talking to women and doesn’t have a particularly bright mind. But thanks to the cat Holmes he will be able to do his job and solve the most unusual cases that come to his police station. So, in theory, the cat only accompanies Yoshitaro, but the truth is that the real protagonist of everything is her. Without her there would be no progress in the cases, there would be no story and definitely the readers of this series read it for her, for the cat Holmes. The cat doesn’t speak, doesn’t have any magical powers or anything like that. She simply stands next to the most important clues that without her Katayama would pass by. I think that is the real secret of the popularity of these books: they are suitable for even the most skeptical minds.

This first installment, Los misterios de la gata Holmes, is a mystery with murders, prostitution and a lot of tension, but at the same time the writing style is light, nothing vulgar or too descriptive. It is worth noting the presence of several rather strong female characters and the fact that the cat and her presence create a sense of relaxation that is often lacking in modern mystery novels. These are not books that stress us out, they could be categorized as cozy mystery.

The outcome of the plot is neither too fast nor too slow. The final solution of the crimes is quite logical and I have to admit that I only partially imagined it. The Japanese lifestyle, society’s expectations, or hopes for the future are very well reflected in the daily lives and actions of the characters.

It is a perfect book to read on a stormy summer afternoon and, if possible, with a cat on your lap. After reading this first volume you will want to continue with the next two, La mansión de los gatos and La rapsodia de la gata Holmes. I hope that the Quaterni publishing house will soon bring us more books in this series!