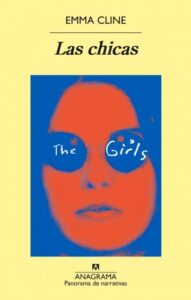 What makes people capable of killing? And what makes young girls able to do it? The novel The Girls by Emma Cline was inspired by the brutal murders perpetrated by the Manson family in the summer of 1969.

Ignored by her divorced parents, Evie loses her best friend. The abandonment and betrayal by the closest person could not have come at the worst time: at 14 years old, Evie needs attention, she needs to discover who she is. Fascinated by Suzanne and the girls around her, she goes with them to an abandoned ranch on the outskirts of the city where she meets Russell, the leader of the group. Russell is clearly a reflection of Charles Manson and the girls on the ranch, his infamous “family.”

Cline analyzes the relationships between the inhabitants of the ranch, the relationships between men and women, the difficult situation of the latter in the 1960s. To add an even more sour touch, we see that 20 years later (the story is told from the time perspective) women remain in an almost equal situation. Could Evie become one of the group? Will he participate in the murders that will shock the world? How will her life change after this summer?

Evie, as an adult 50 years later, reflects on her actions as a child, raising questions about what it means to grow up a girl and how injustice in the world can lead to terrible violence. It is a story of corruption and abuse, set in 1969, in which a bored Californian teenager joins a cult. The protagonist wants to be older than her fourteen years and is attracted to the rebellious and free-spirited young women she sees one day in a Petaluma park. The novel traces Evie’s accelerated sentimental upbringing, as she is introduced to what are supposed to be the freedoms of free love and drugs but actually manipulate the cult members into violence, all under the sway of the dominating cult leader.

It’s important to mention that although it’s clear from the descriptions that the author was inspired by the Manson family, his name does not appear in the book. The leader of this cult is named Russel Hadrick. But all the details make the inspiration very clear, such as the fact that the sect occupies an abandoned ranch on the outskirts of the city. The ranch seems at first to be a very welcoming alternative. Evie is quickly adopted by Suzanne and some of the other girls, girls who are protective of her one minute and indifferent the next. Evie realizes that several of them are sleeping with Russell and soon she too will be called to meet him.

I prefer to stop here, not to reveal more details. All the girls from the ranch come with their demons from the past, they all have their stories. The men in the novel take advantage of their weaknesses, they are the typical predators. But this never justifies the things that girls are willing to do to belong to the group.

A book set during the hot California summer, perfect to question what we know about the influences adolescent girls face.

These are my three recommendations to read this summer. Three very different books, to satisfy different tastes. Do you fancy any? What books do you propose for the summer?