How fast time flies! We are already in August and soon the holidays will come to an end. 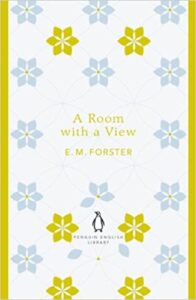 For travel lovers I have thought of three books that invite us to pack our bags and enjoy unknown places. Same as last month, we will publish them throughout the week. Let’s see what you think of them!.

A room with a view, E.M.Forster

A trip to Italy in A Room with a View by E.M. Forster. It’s a novel that hides more than it seems at first sight. Published in 1908, it presents us with a curious almost-love triangle.

Lucy Honeychurch travels, along with her obnoxious cousin Charlotte, to Italy where she begins to discover what she wants from life. She experiences her first, somewhat awkward, kiss with George Emerson whose social position makes any relationship between them unthinkable. The descriptions of a summer in Florence contrast delightfully with the entertainment back in England, where Lucy becomes engaged to Cecil Vyse, a well-placed young man. When it seems that our protagonist is going to have a most conventional life, George reappears. What will Lucy decide? Is Cecil really the right one for her? A comedy, a romantic story, a novel that presents and criticizes Edwardian society and the social changes of the time.

The story has seduced me, it was hard to put the book down. If I have to choose one thing to highlight, I especially enjoyed the comparison of the Lucy’s two kisses: the force of instinct and spontaneity versus the boredom and expectations of the family. As a curiosity, I can tell you that The Modern Library classified A Room with a View in 79th place on its list of “The 100 Best English-Language Novels of the 20th Century” and in 1985 a film adaptation by James Ivory was released with Helena Bonham Carter as the main character. It was nominated for 8 Oscars and won 3, including for the best adapted screenplay.

If I had to sum it up in one sentence, I would say that it’s a story about a young woman belonging to English society who tries to make way for her personality by overcoming the obstacle of social conventions with a beautiful journey in the background.