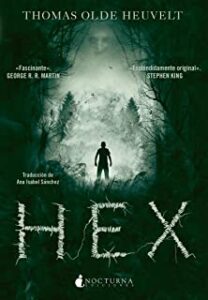 Novels like Hex by Thomas Olde Heuvelt stay with me for weeks, sometimes months. A horror story where yes, there is a witch, yes, there is a secret (or more), but the most terrifying thing is the people. An American town “with charm”, Black Spring has an original festival celebrating a witch burned in 1664. The Witch of Black Rock. The problem is that the witch… is still there.

Katherine van Wyler appears anywhere in town. In the square, in the houses, in the middle of the street. The inhabitants of the Black Spring are trapped, they cannot stay away from their town for long without risking death. The only thing they managed to do, many years ago, was to sew up the witch’s eyes and lips so that she doesn’t kill everyone who hears her speak. What is it like to live with so many limitations? Being stuck in one place forever? Under constant pressure, knowing that if the witch opens her eyes or opens her lips it will be the end of everyone in Black Spring? People can get used to anything, but if the situation suddenly gets worse, the witch won’t be the scariest thing in town.

Hex is a wonderful horror novel that perfectly describes human nature, the mechanism that guides groups during “witch hunts”, when looking for a scapegoat. The inhabitants of Black Spring are trapped in their city without the ability to travel. Is it weird to mention this book in a post about travel books? Perhaps, but it seemed like a perfect novel to visit the towns around us with the most original festivals. The witches of Zugarramurdi, “The descent of the witch” in Vidángoz, Soportújar, the village of witches, the witches’ festival in Llanes… We have many places in Spain that hide the most mysterious or tragic stories.

What books inspired you to travel? Do they resemble any of our proposals? Do you recommend us any?