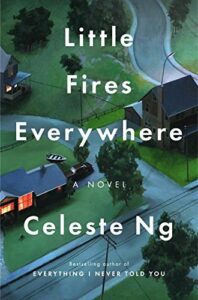 The summer vacation is over and the literary meetings are back. The first meeting of the Donostia Book Club is on September, 12th and this time we are talking about Little Fires Everywhere by Celeste Ng. The novel won the 2017 Goodreads Choice Awards and was the author’s second published book.

The novel starts strong: we see a rich American suburb where a house is burning and we discover that the fire was set by the youngest daughter of the family, Izzy. Why would she do something like that? The more we read, the more things we discover and suddenly the fire thing no longer seems so serious to us, putting everything in perspective. A masterpiece that shows how the hypocrisy of many people, the stereotypes and rules that are too strict can negatively affect the lives of families and communities.

The story revolves around two families: the Richardsons and the Warrens. Elena Richardson represents a successful woman, with a family model that seems to be taken from TV. Mía Warren, a single mother, an artist with a mysterious past, with her arrival in the Shaker Hights residential area makes all the values that Elena believes in to be questioned and Elena’s life won’t seem as idyllic as she wants it to appear.

Between a lot of drama and a lot of social criticism, there are also sarcastic touches that, despite reading about serious things, will make us smile. A fluid and undoubtedly original read that leaves us wanting to know more about Celeste Ng’s writing.

I hope you feel curious enough to read the book. Here are some questions you might want to consider as you read: