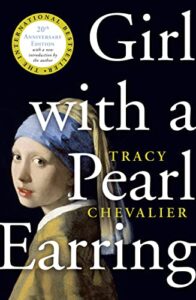 At the Donostia Book Club meeting on October 10th we are going to approach Girl with a Pearl Earring by Tracy Chevalier. The novel was first published in 1999 and is the book that brought its author to international fame and allowed her to devote herself to writing full time. The novel became an international bestseller and many of you probably already know that it recreates the relationship between the Dutch painter Johannes Vermeer and the protagonist of the homonymous painting. An original historical fiction. In 2003 the novel was made into a film with Scarlett Johansson and Colin Firth in the lead roles.

We have very limited information about the life and death of Vermeer and his family and that was the inspiration for Tracy Chevalier’s novel. It’s the story of Griet, a 16-year-old girl who, due to the difficult situation of her family, is forced to present herself as a maid in the house of the famous painter. Griet enters adult life in a new for her environment, in a Catholic house (as opposed to mostly Protestant houses in the city), where she has to be careful with everything she does or says. But her way of seeing the world catches the painter’s attention and Griet will end up being immortalized in one of the most famous paintings in the world. It’s fiction, you don’t really know who the girl in the painting is, or how the Vermeers lived, but it’s a pretty realistic fantasy about how this story could have been in reality.

Without a doubt, the strong points of the novel are the setting and the appearance of several of Vermeer’s paintings that we can identify thanks to very rich in detail descriptions. Its an original historical novel inspired by real events, but with a great role of the author’s imagination. Surely it will give us many topics to analyze. If you want to get together with Donostia Book Club, or you just want to delve into some topics, I leave you with some interesting questions: