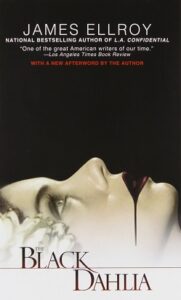 First published in September 1987, The Black Dahlia by James Ellroy is a fictionalized account of the real life murder of Elizabeth Short. Short’s body was found in an abandoned field near the famous Hollywood sign on January 15, 1947. Despite a long and public investigation, the murder remains unsolved to this day. It’s one of the most famous unsolved cases in American history. This twisted noir novel is also inspired by the author’s family story: on June 22, 1958, when Ellroy was ten years old, his mother, a nurse Geneva Odelia was raped and murdered and her body abandoned in a ditch on the outskirts of Los Angeles. Both unsloved cases had many things in common and in Ellroy’s imagination connecting them felt right.

In the novel, there are many different themes to analyze, but most of all it’s an interesting vision of what life was like in Los Angeles in the 1940s. We can observe well-crafted male characters versus female characters trapped by society’s expectations. And all that with direct and crude descriptions, the use of almost violent language. Aggressiveness is present in the pages of this novel in many ways.

Also, it’s interesting that The Black Dahlia is a part of Ellroy’s “L.A. Quartet novels”: The Black Dahlia, The Big Nowhere, L.A. Confidential, and White Jazz. All of them have won numerous awards and are international bestsellers and can be read independently.

The Black Dahlia, as various other novels by the author, was adapted for cinema. A neo-noir crime thriller film directed by Brian De Palma was released in 2006 starring Josh Hartnett, Scarlett Johansson, Aaron Eckhart, Hilary Swank, and Mia Kirshner.

I’m well aware that because of it’s content it’s not a book for everyone, but if you feel like reading it along with us, here you have some questions to ponder about: